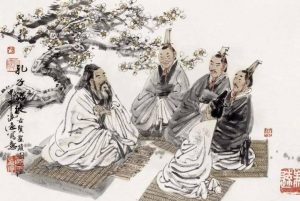 We will discuss Confucianism, 儒家, a philosophy has been at the center of Chinese thought–as well as Korea, Japan, and Vietnam–for almost two thousand years.

Confucianism came under intense scrutiny in 1919 with the May Fourth Movement. This student led rebellion sought to replace the imperial values of the past with Marxist thinking and value. For the most part 儒家 was suppressed.

However, when Deng Xiao Ping, 鄧小平, came to power in 1978 he brought back several key Confucian concepts such as 小康. Ancient ideas from the past were given a new interpretation. In Taiwan Xie Dong Min, 謝東閔, offered an interpretation of大同 as an important concept in producing harmony between Taiwan and China.

For the discussion, do your own exploration 儒家. Focus on the concepts of 孝順, 小康, 大同. How have these concepts changed since they were first written about thousands of years ago.

Wiki Links to the Topic